The Fool and the Cards 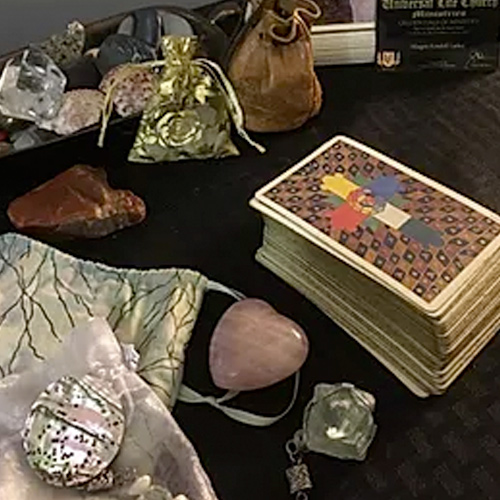 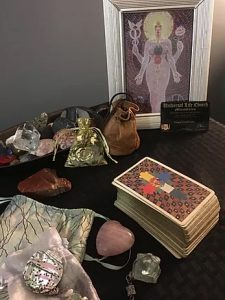 I have been reading the tarot for over 20 years. Cards, in one form or another, have been a part of my life for as long as I can remember, however. Some of my earliest memories are of playing Memory, Go Fish, and Old Maid with my mother. My father’s family has a longstanding tradition of playing poker at family gatherings, and I learned the family ethos of proper card playing—superstitions and all—by the ripe old age of nine. A deck of cards fit easily in my hands even when I was small, and I spent many hours learning to shuffle them, bridge style, just like my parents. I spent my teen years honing my strategy and skill in card-playing, always up for a game of Spades in my public high school’s bored classrooms, and becoming ruthless in my Phase 10 and Rummy tactics, which were endlessly sharpened against my unbelievably cunning and merciless kid-sister’s game.

So it should have been no surprise that I would find my divination tool when my best friend and I sat in her first “grown-up” apartment after high school and she brought out her brand new tarot deck. When we first began playing with this novelty, we spent many hours doing readings and taking copious notes on everything from the moon phase, to the weather, to any cards that fell out during shuffling—anything to help us make some sense out of what they were telling us. I knew enough to know that I didn’t know what I was doing yet, but I was irresistibly drawn to the archetypes on the cards, as well as the familiar form of the cards themselves.

Later, as a college student, I got a job at a local metaphysical bookstore that offered tarot readings. I had mentioned to coworkers that I was learning to read the cards, and one day the owner of the store casually asked me to read for him. I did—horribly—looking back now, I think I even used the little book that accompanied my deck! When we finished, he asked if I would like to read at the store, and I answered that I’d love to someday.

“All right then,” he said. “You start next Saturday. Better spend the week studying that book, because as of next weekend, you won’t have it as a crutch anymore.”

To say I was stunned is an understatement. Even though I was sure he had made a mistake, that I was not fit to charge people for my readings, I was excited in spite of myself. I spent the week poring over books at home and in the store, and feeling extremely anxious. The next weekend, I became The Fool, stepping off the ledge into the unknown, as it is for everyone who first learns to do something as a hobby and then makes the leap into doing it professionally.

The Fool, as depicted in the Rider-Waite and Crowley-Harris decks. 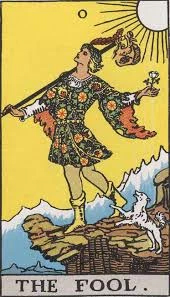 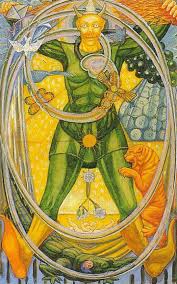 The Fool’s number is 0. It is not really a number—it’s the absence of quantity, the absence of matter. It is nothing and everything at the same time, because it contains all possibilities. It is the unhatched egg, the pregnant belly, the empty stage, tabula rasa. When we embody The Fool, we pay no mind to all the fears and reservations we and others around us have. We simply move through inspiration, without expectation or demand, trusting that whatever is supposed to happen, will. This state of no-thing-ness, of neither-here-nor-there-ness, occurs multiple times in our lives—as a matter of circumstance and as a matter of choice. As that old song says, “Everybody plays the fool…”

However, when we resist being The Fool, things can get messy. We may still be having a new experience or entering a new role, but we may be going about it reluctantly or even recklessly. Being The Fool inevitably means making mistakes—that is crucial to the experience and the learning—but problems arise when we are unwilling to face that we are, in fact, a neophyte and not in control.

To understand the power of this archetype, think back to a time when you took a leap of faith. How would your life have been different if you hadn’t taken that chance, followed your instincts, and left the beaten path?

We can point to these divergences of paths as points that changed us. We would literally be different people than we are now. The Fool teaches us that before each choice we make, there is a moment in which we stand in the unknown. It contains every possibility, every outcome. It is the moment of stasis, when all is balanced and in harmony, just before the scales tip and we make our choice.

Each of us will surely be The Fool again one day, stepping off the ledge into the bright and weightless air of the future, our hands open and empty. The great lesson of this card is learning to embrace possibility instead of being afraid of it.