Naked Athena? Call Her by Her Real Name 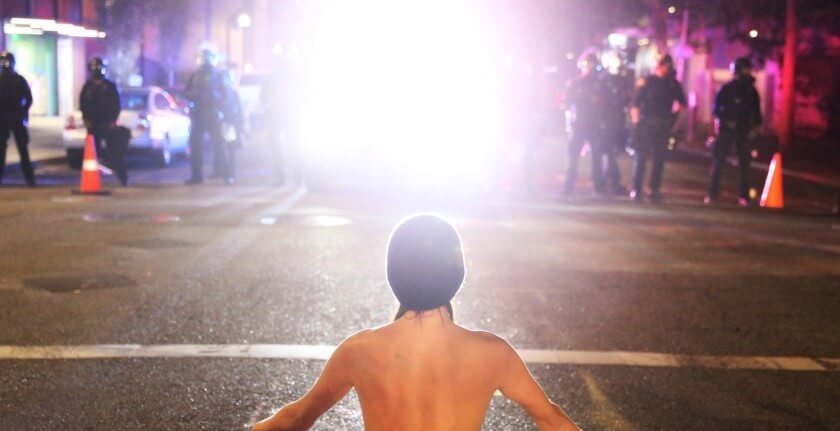 Stunning photos and film clips of a female protester in Portland, Oregon are circulating on Twitter and in mainstream media the last few days. Clad in nothing but a mask and a hat, a mysterious woman single-handedly faced off a large group of armed federal law enforcement officers during a dangerous and escalating protest by displaying herself naked in the No Man’s Land that formed between the officers and protesters at the intersection of Third Avenue and Taylor Street.

Video clips of the encounter document that she showed no sign of trepidation or intimidation, and approached the line of law enforcement with grace and no small measure of seduction. Several accounts of the anonymous protester describe her assuming a number of poses during her silent confrontation with law enforcement, the range of which spanned from meditative to seductive. At one point, she sat down on the pavement, opened her legs, and unabashedly welcomed the gaze of the mostly male officers. After approximately 10 minutes of her tantalizing standoff, the officers dispersed, and she disappeared into the crowd, unharmed.

She has been hailed as “Naked Athena” by the media, and I wholeheartedly agree that her actions were nothing short of divinely inspired. But if I may be so bold, I think attributing the protester’s inspiration to Athena is paying homage to the wrong goddess.

Athena, the Greek goddess of wisdom and war, was a fierce warrior who was known for her intelligence and strategy. And though the anonymous protester was fearlessly facing an armed, hostile force while she herself was armed with only the gifts with which she was born, the media seems to be forgetting (if they ever knew) that Athena was first and foremost a Daddy’s Girl. Athena was known to be a defender of Her father, Zeus, and His rule, excellent at debate and strategy, and downright terrifying on the battlefield. In short, Athena is the Princess of Swords. And though it’s deliciously tempting to compare this protester to mighty and terrifying Athena, I must point out that Athena would’ve been leading the line of law enforcement, defending the patriarchy and Her father’s rule.

There was a goddess present in the street that night, clad in the flesh and blood of a mortal woman brazenly displaying herself on the pavement for all to see, inviting lust, worship, admiration, and fear.

There was a goddess leading the activists and their call for justice. A goddess in the form of a graceful, beautiful, and terrifying woman who is not bound by the rules, judgments, and constrictions imposed by such impermanent things as nation-states.

There was a goddess standing guard in Portland that night, leading Her people to stand up for themselves, their justice, their lives, their loves. She is something very different from Athena’s ruthless and calculating Princess of Swords. This is a goddess of fire, blood, lust, and ecstasy. Someone who looks much more like the Queen of Wands. Her glorious name is BABALON: Our Lady the Scarlet Woman, The Mother of Abominations, the Bride of Chaos.

Babalon is the Western esoteric name for the Sumerian goddess Inanna and the Babylonian goddess Ishtar. Her role in attaining enlightenment is to receive all and deny none. All those who give themselves over completely in worship of Her are drained into Her cup of abominations—sucked dry in a fit of carnal ecstasy, if you will. It’s a metaphor for the death and rebirth of ego surrender, which every prophet, saint, and savior achieves in order to reach enlightenment. Babalon is the vehicle for return to the Light, the Source, the All. The whole of Babalon’s teachings are couched in an allegory of sexual relations, because orgasm is a tiny death—a sacred, transcendental experience that gives mere mortals a glimpse into the ineffable, infinite light of Source.

Thus, Babalon is a goddess of sacred metamorphosis, an archetype of defiantly female sexual impurity heralding transformation and evolution, emphasizing that the sacred and profane are one and the same. She is beyond beautiful—the fullness of sexual pleasure, the embodiment of divine feminine sexuality and carnal knowledge. That is her loving side.

The power which our anonymous protester marshaled and displayed in the simple act of sharing her body without condition or malice—to such a degree that a large force of angry and anxious warriors was temporarily disarmed by surprise and the sheer wonder of beauty and attraction—was nothing less than the deliverance of the Divine Feminine, of BABALON the Beautiful Herself.

For a moment, there was a retreat from the brink of deterioration, madness, and desecration; for a moment, no one was hurt. For a moment, Third Avenue was simply filled with people—each and every single one precious and divine and worthy of love.

But, Our Lady of Abominations also has a warring side. Because She is the Bride of Chaos and the divine embodiment of transformation and evolution, Babalon is also the goddess of war, activism, empowerment, and revolution. Girt with sword, unimpeded by gods, and covered in the blood of sacrifice, this is the goddess who will see justice be done. This is no victim’s deity. She takes back what has been stolen, rights the wrongs, returns the balance.

As this long, hot summer wears on, and as the sea change in the course of American history continues, may we be inspired by Our Lady to continue the fight for righteousness and universal equity. May we find divine joy in love as well as in struggle. May we be welcomed into Her arms of Love and Her arms of Justice.